CHOOSE A DIFFERENT PATH (PART 2 OF 2)

In our last story, we shared the roots of our cooperative spirit. We gave you a glimpse at what has driven us to do what we’ve done and what continues to steer us toward the future.

Choosing a different path showed us a business full of possibilities and opportunities to reshape our environment and the relationships we’ve established.

Now, we’re showing you the true visionaries — from past to present — whose efforts and commitments have contributed to making Orbea a global leader.

Meet María, Rubén, Olga, Nagore, Manu and Haritz. Employees and cooperative partners who agreed to walk a different path. While they hold different roles, they shared the same values that, half a century ago, led a group of people to embrace risk beyond reason.

Here, we’re sharing their perspective on how Orbea’s cooperative dream has survived through 50 years, and why we can expect it to thrive for a lifetime more.

We are grateful for all of them, and for you, too. Because without your passion, nothing would have been possible. 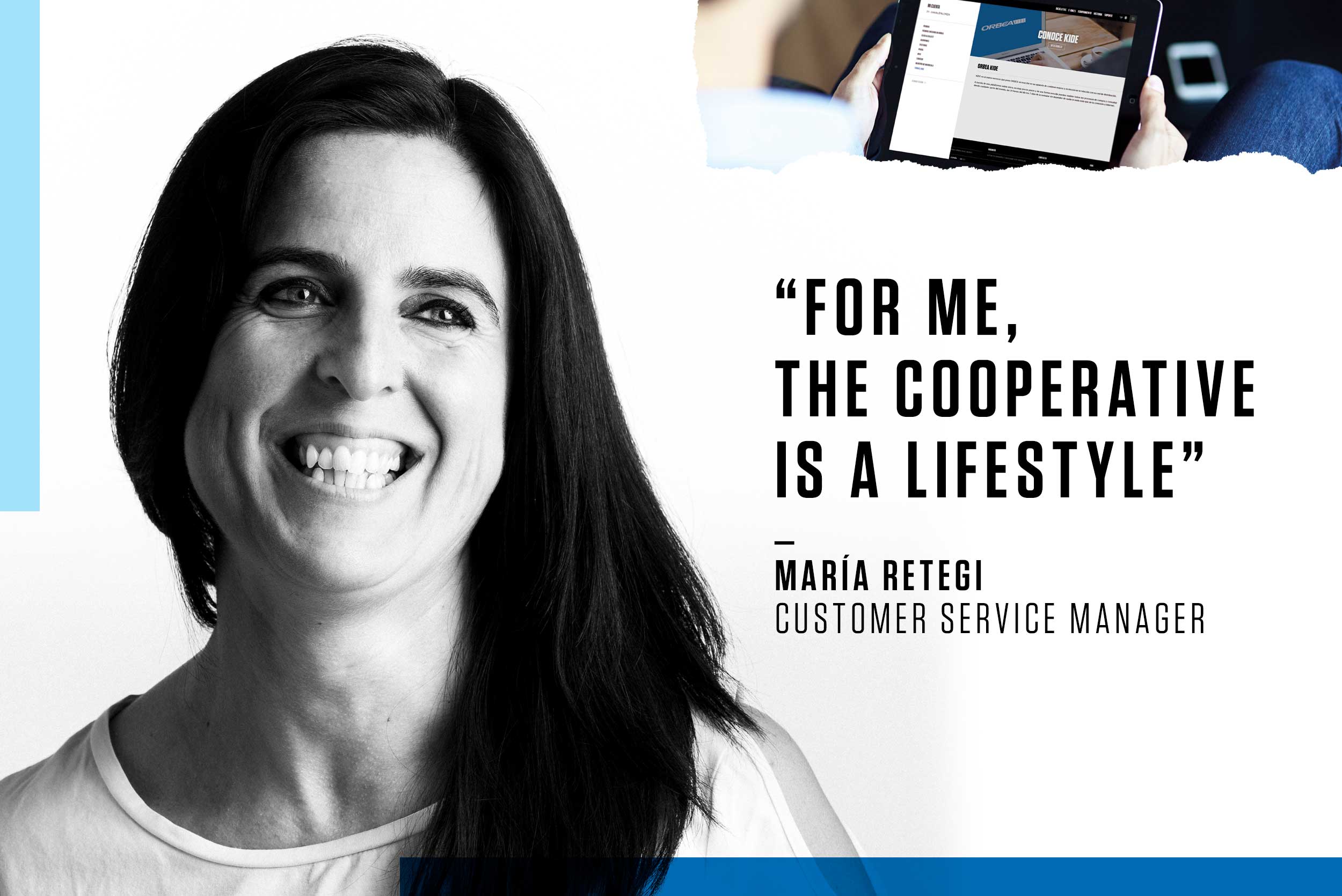 A cooperative member from the cradle, María Retegi is responsible for Orbea’s Customer Service Department, and her team pays close attention to our clients in 70 countries, ensuring they have a positive experience pre-sale, during sale and after-sale.

“For me, the cooperative is a way of life," she says. "I have lived it since I was born because my whole family has worked in a cooperative. My father was involved since the beginning of the cooperative, and his goal has always been to work for the community; to improve things, both inside and outside the workplace".

María, who has an enormous knowledge of Orbea’s gear and philosophy, highlights how the cooperative vision determines her response to situations “with a team action”.

"It means being responsible for the situations you live," she says. “It is not something you have to remind yourself daily; it's just something you believe in”.

The idea that cooperative employees are responsible for their own destiny has enormous value for María, which is closely related to "supporting others and helping each other", she says.

The cooperative is designed to inspire people to “act, always be on the move, never give up and count on others for the good of the environment”. 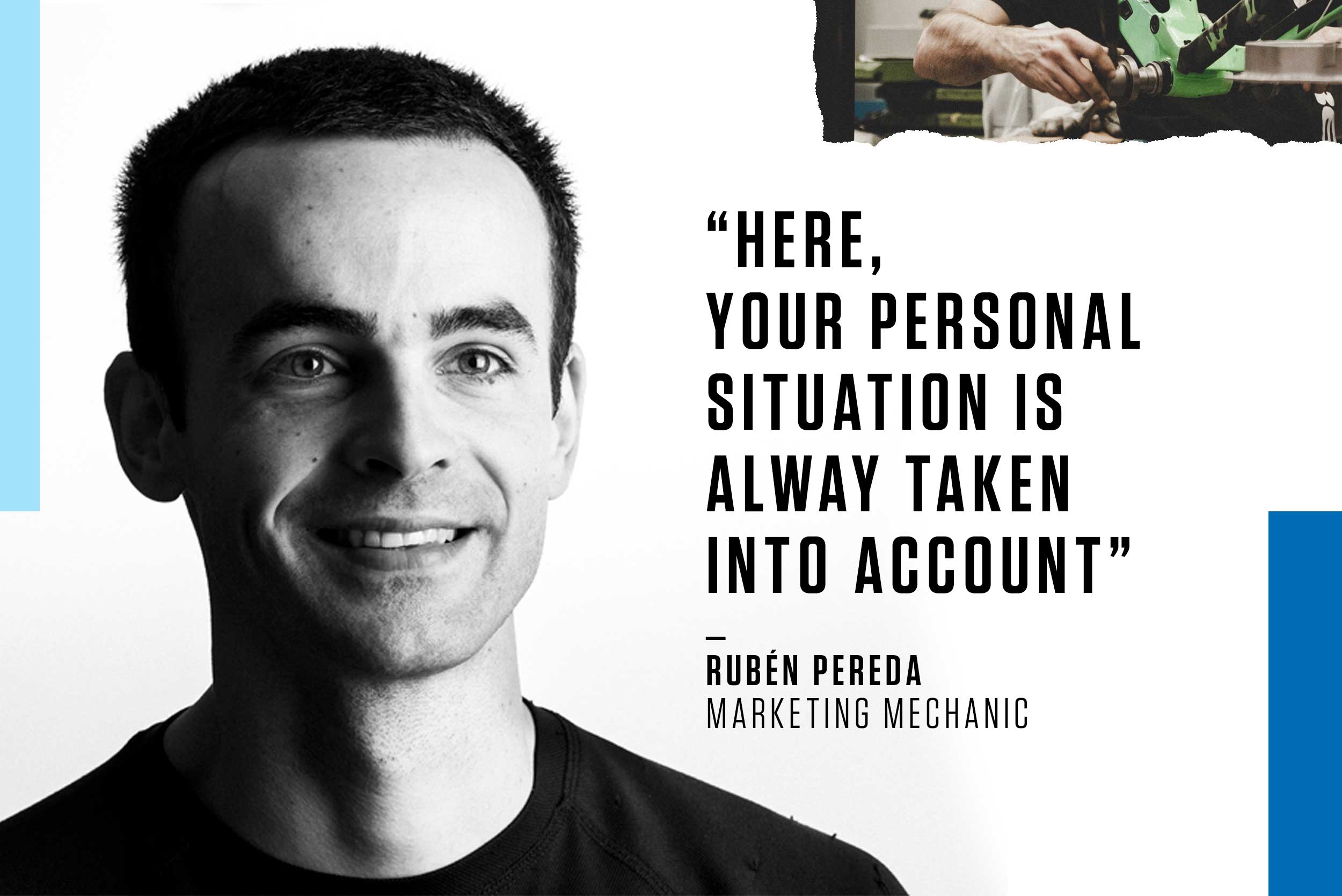 "I've been in the cooperative for four years,” he points out, “and one of the things I appreciate most is the closeness that exists between the people who work here. They always put themselves in your shoes. In my case, I just became a father, and that perspective is very much appreciated. Everyone always thinks about your personal situation, and it makes things easier for you".

Rubén has cycling in his blood. He competed in MTB in his youth and was always interested in the mechanical side of it. He later went down the path of teaching, but Orbea appeared on his radar.

"Before entering the cooperative," he says, "I was connected to bike shops, and it is true that Orbea sees things — and is seen — with different eyes”.

Reflecting on the perception of the brand abroad, “They consider us something different,” Rubén assures. “Something more handmade, made with care, with another philosophy. A large family of workers took the reins of the company and managed to lift it. It is something that is perceived abroad and is appreciated”.

Rubén personally identifies with Orbea’s values, defending them as his own. "In the cooperative, everything is very transparent and very close, and we are aware that we have to work together to make the company go well," he concludes. 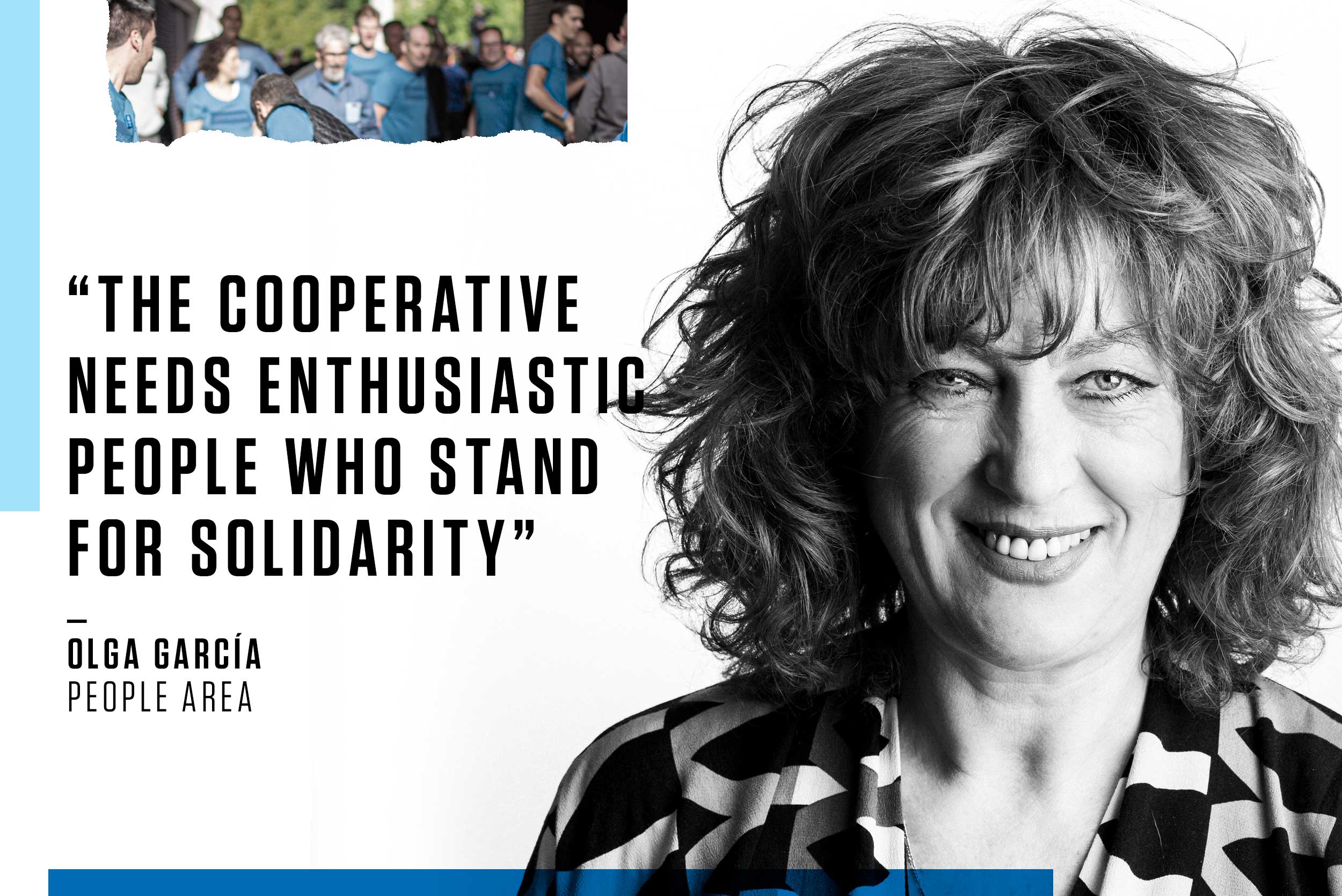 Olga García works in the People Department. As the daughter of a founding cooperative member, her relationship with Orbea started when she was a child. When the opportunity to finally work here presented itself to Olga, she didn’t think twice. After working in different areas, she now posts up in the area where she finds the most collaborative projects.

“People start working with us because they are attracted by the brand,” she points out, “but when our department explains what it means to be a working partner, there is a new level of intrigue and expectation. It surprises a lot of people”.

Olga mentions the need to have professionals who defend values ​​that stand up to Orbea's philosophy. “We need people who are supportive and who are convinced of the values ​​of being a cooperative partner. You put your work into a project you believe in, and it’s betting on success. Cooperatives pay a monthly advance payment, which is not the same as a salary. We anticipate something that, at the end of the year, we trust will be successful.” As a result, it involves a certain degree of uncertainty.

Working in the People Department of ​​a cooperative like Orbea is "simple,” since the workers “feel part of the organization and the project.” Therefore, she says, they are well informed, have a voice, vote and stand out to be heard. “We are all accomplices, we are all one, and so our efforts become much easier”.

Olga firmly believes that "the cooperative movement is the best option, and it’s how companies who visit us from around the world learn from our model".

"Our trajectory," she adds, "demonstrates that there is hope in a different job and business style. Everyone counts on us for more than just work. We are active participants in what happens from within the cooperative". 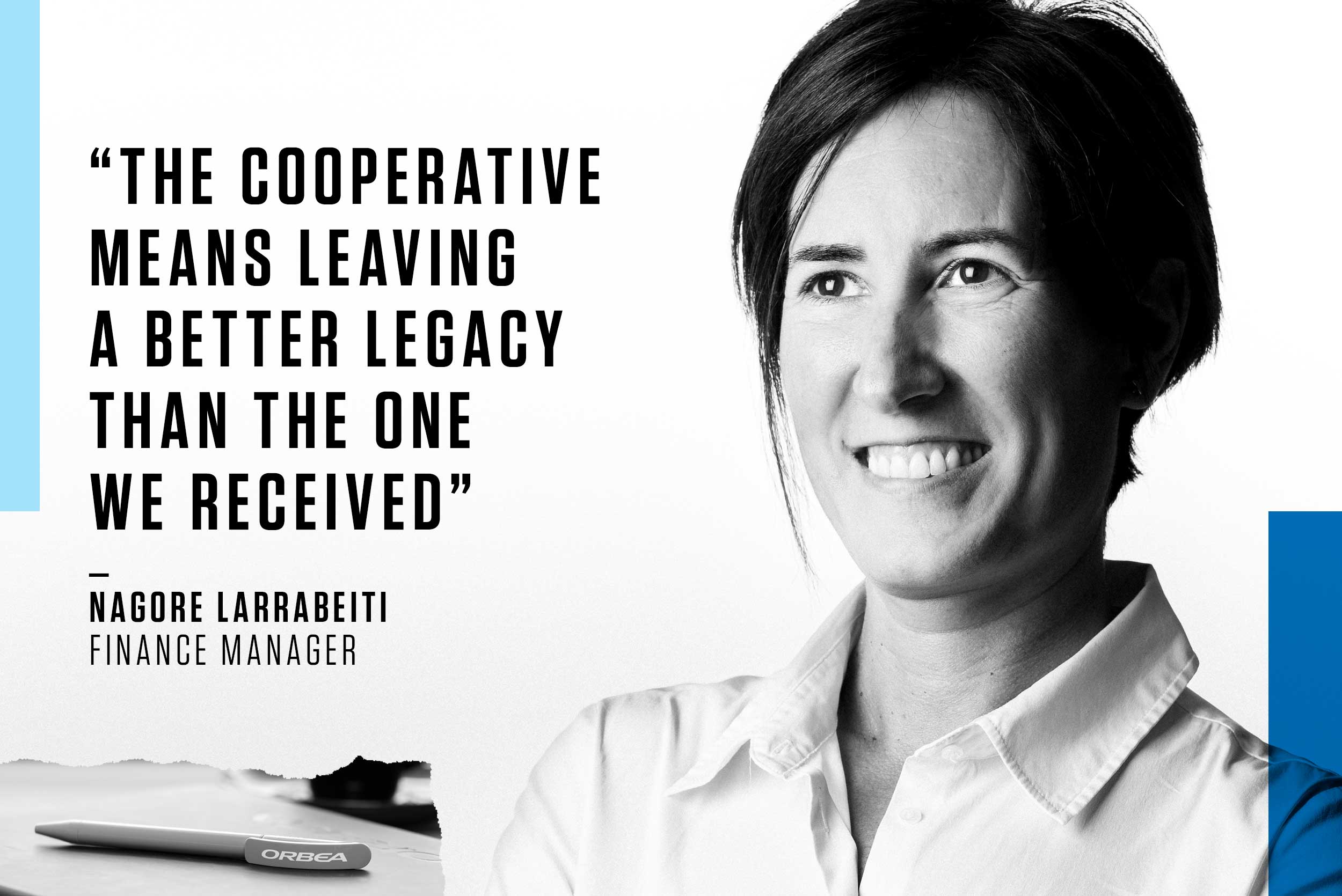 Nagore Larrabeiti has been working in the cooperative for 13 years and has been the Financial Director of Orbea for seven. She was attracted to the brand, but, as she acknowledges, "I did not know the philosophy of the cooperative world”.

At the beginning, one of the aspects that most impacted Nagore was "transparency in information." Specifically, taking into account the department she works in. “When I arrived,” she recalls, “it was a shock for me to attend an informational meeting where the manager, microphone in hand, revealed everything about the cooperative. You could ask anything without a filter, everyone could say the same, and they were heard. ‘This is the bomb!’ I thought. Now I see it as something completely normal and I wonder, ‘Why doesn't everyone work like this?’".

Nagore recognizes that her work philosophy has changed a lot in this time. “I work much better,” she says, “and the hours in the office are less. Here, you are completely respectful of people's time and personal and professional life”.

Thirteen years after her arrival, she defines the cooperative as a way of understanding life. "It is to leave a legacy better than the one we have received," she says, although it is not always easy. "In the Financial Department, we have to be practical," she says. “Aspiring for something better everyday may involve tightening your belt a little more. Sometimes, you make decisions that you don't like, but we have to assume they are for the future good”.

Finally, Nagore stresses the importance of the human factor in the organization. "The cooperative is made by people and today, more than ever, we have to hold on to personal values". 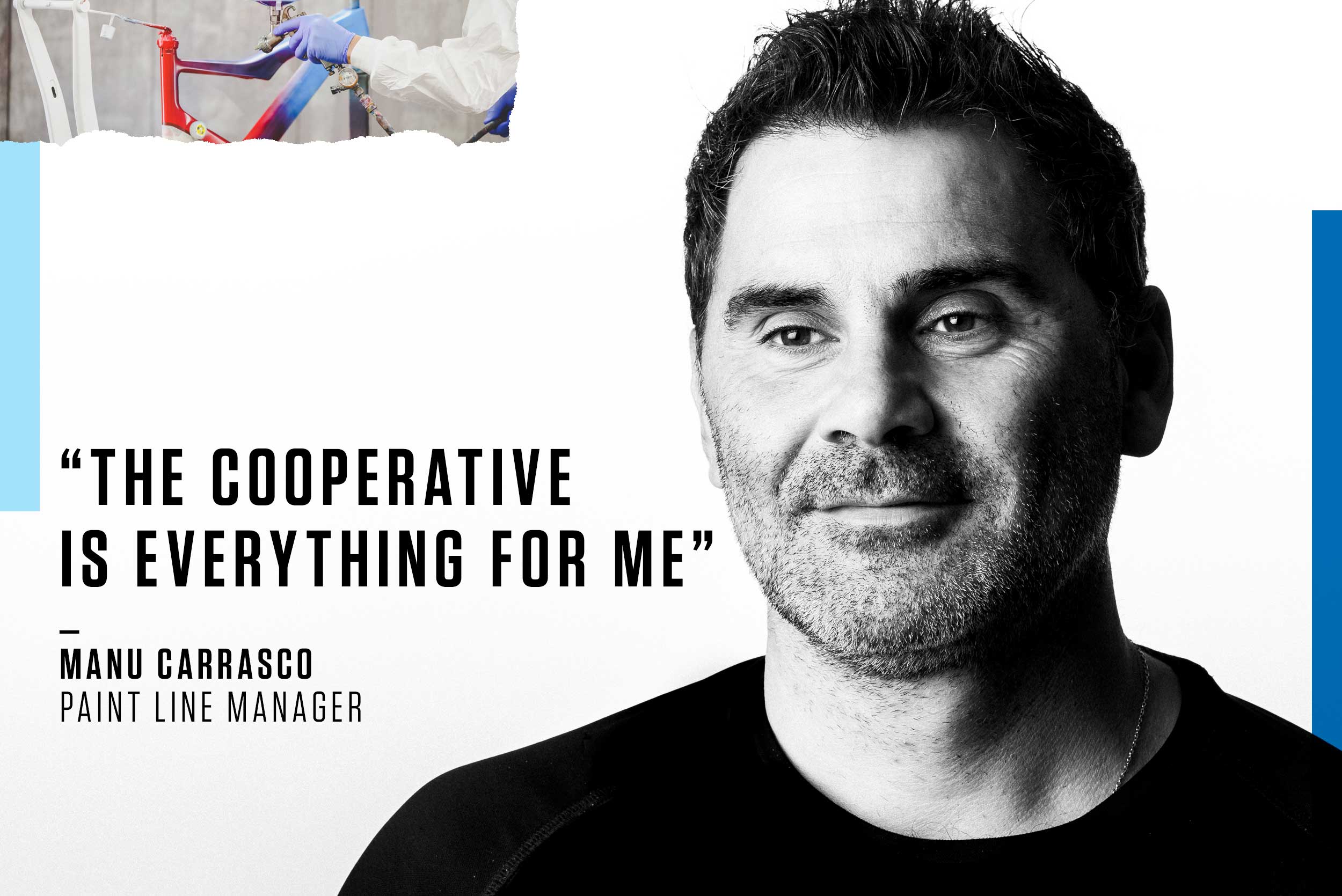 Manu Carrasco is responsible for the two Orbea Painting lines: Automatic and Carbon.

He has been in the organization for 21 years, 16 of them as a member of the Governing Council of the cooperative, the management body of Orbea.

He makes it clear: "The greatest virtue of the cooperative is the importance attached to each worker. Here, you have a feeling of belonging to something, you feel you have something in the company that is part of you. The cooperative is everything to me”.

One of the values that stands out is the transparency that characterizes the day-to-day of the cooperative. "You know the state of the company at all times," he says, “and you know when you have to push and close your shoulder. Year by year, you become more involved in everything. I would not exchange the cooperative for another type of company”.

With his work, Manu demonstrates his enormous commitment to his colleagues. “These years in the Council have helped me to think holistically about the cooperative,” he adds. “I know that my contribution today will be the legacy I leave to my children or to whom I work with tomorrow at Orbea. There has to be a solid foundation to continue functioning in the future”.

Due to the nature of their roles, Manu and his Painting team see the growth of the brand in real time. "In recent years, we have grown a lot in volume, but especially in quality and work methodology,” he explains. “It has nothing to do with what I experienced in my beginnings in the company". 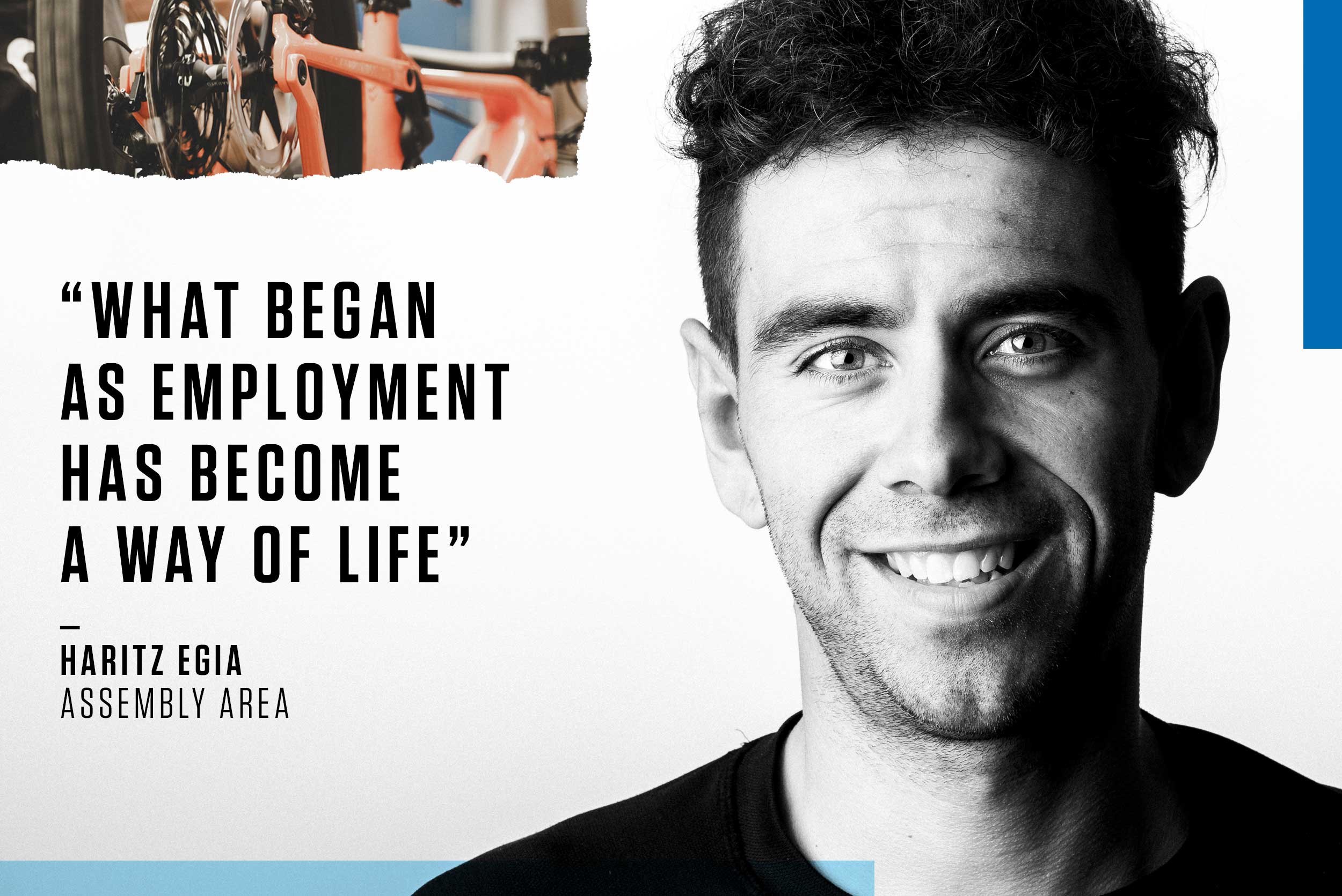 Haritz Egia works on the Assembly Line of the Mallabia plant. Currently, his department is focused on electric bikes, but all kinds of bikes have passed through his hands. A training course allowed him to land at Orbea, where he has been for five years.

"From the first moment, I liked the atmosphere of the cooperative,” he recalls. “The relationship with colleagues and managers has always been phenomenal. It's all very familiar".

For Haritz, the cooperative is “an excellent way of working, a different way that motivates people more. I feel very happy here and it is a job that I like very much”.

Haritz, 33, says that working at Orbea has been a journey of discovery. "When I started,” he remembers, "I thought I was just going to work for another company. But I gradually got into the world of biking, which I didn't know much about, and now I feel very tied to this job”.

Cycling has already become an essential part of his life. “I ride bikes, and in my spare time I’ll go out to ride with fellow members of the cooperative. I’ll see people riding out there with models that I’ve assembled myself, and I even ask them, jokingly, to see how they are doing. What began as a job for me has evolved into a way of life”.

In his daily work, Haritz has also contributed to the growth of the cooperative. “When I got here,” he remembers, “there were much fewer people and bikes being ridden. There was not even an opportunity for e-biking, which is what I do today. This has changed a lot in a few years.

We'll be back stronger